Private E.G. Cleckner was born in 1896 in Doylestown, OH, and joined the U.S. Army in August 1918. He was assigned to the 159th Depot Brigade, a replacement training unit, and several weeks later was transferred to the Base Hospital Medical Detachment at Camp Zachary Taylor, outside Louisville, KY. Pvt. Cleckner was discharged in May 1919 and returned to his native Ohio, where he worked for years as a tire fabricator before his death in 1975.

Camp Zachary Taylor
Camp Zachary Taylor was one of the largest Army training installations in the country during World War I. Built in only 90 days at a cost of $7.2 million, the camp comprised 2,730 acres and could house more than 47,000 troops in its 2,100 buildings.

The base hospital alone covered some 53 acres. During the course of the Great War, more than 125,000 soldiers were trained at the camp, including noted author F. Scott Fitzgerald, who mentions Camp Taylor in his novel The Great Gatsby. 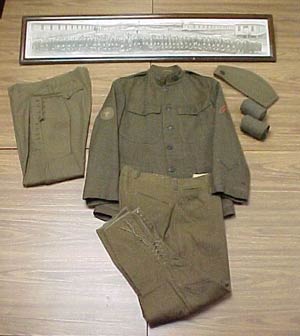 Influenza Epidemic
With so many men in a relatively confined space, the influenza epidemic of 1918 struck Camp Taylor with devastating results, killing more than 800 soldiers and sending another 13,000 to the hospital. The 84th Division was trained at the camp and many units returning from Europe demobilized there after the war.

The camp closed in 1920 and the land was auctioned off in the following months. The site soon became a residential neighborhood, with many of the small wood frame houses being built atop the foundations of former barracks and other facilities, using timber from the original Army structures. The site is now a suburb of Louisville.

Uniform & Exhibit Pieces
Pvt. Cleckner’s uniform is a superb example of an enlisted man’s uniform from World War I. It is also the only medic uniform in the Memorial’s collection from that era. And in addition to the uniform, Mr. Cleckner also donated a large framed panoramic photograph dated January 1919 showing the entire Base Hospital Medical Detachment. View the pieces of this exhibit in our photo gallery.

These items are a great addition to the Memorial’s holdings, not only because of their near-pristine condition, but also because of the connection to Camp Taylor and its association with so many of America’s fighting men during the Great War.
E-NEWSLETTER
GIFT SHOP
PODCASTS
SCHEDULE TOUR
[]