About The Case
The sterling silver and 14 karat gold cigarette case dates to the early 20th century and is believed to have been manufactured by Kerr of New York or New Jersey.

It is engraved “A. MacA.” on the lid and “ARTHUR MacARTHUR / U.S. NAVY / BOWMAN McCALLA MacARTHUR” on the interior. The latter name is that of Arthur MacArthur’s son, to whom the case passed after his father’s death in 1923. 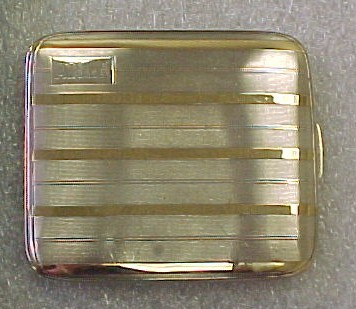 Acquiring The Case
The case was donated to the MacArthur Memorial in December 2005 by John R. Terry, of Fayetteville, Ga., who had acquired the piece at an estate sale in September 2000. This piece is significant in that it has a visible association with not only Gen. MacArthur’s brother, Arthur, but also the General’s nephew, Bowman. It is a very historically valuable piece and helps to fill the void of artifacts from other branches of the MacArthur family.

About Arthur MacArthur
Arthur MacArthur was born June 1, 1876, the first son of future Lt. Gen. Arthur MacArthur and Mary Pinkney Hardy MacArthur. He graduated from the U.S. Naval Academy in 1896 and was commissioned an Ensign. He saw action aboard the USS Vixen during the Battle of Santiago, Cuba, during the Spanish-American War and subsequently participated in naval action in the Pacific during the Philippine Insurrection and the Boxer Rebellion. MacArthur married Mary Hendry McCalla, daughter of Rear Adm. Bowman McCalla in 1901; the couple had five children.

MacArthur was one of the first submarine commanders in the US Navy, and subsequently served on the staff at Annapolis, the Naval War College and the General Board, Navy Department. During World War I, MacArthur commanded the USS Chattanooga and was assigned to convoy duty across the Atlantic, for which he was awarded the Navy Cross. Arthur MacArthur died of acute appendicitis 2 December 1923. Of his 31-year naval career, MacArthur spent 19 years at sea. He is buried in Arlington National Cemetery. In his memoirs, Reminiscences, written nearly 40 years after his brother’s death, Douglas MacArthur wrote “I loved my brother dearly and his premature death left a gap in my life which has yet to be filled.”
E-NEWSLETTER
GIFT SHOP
PODCASTS
SCHEDULE TOUR
[]