Artist Walker Kirtland Handcock
Walker Kirtland Hancock was born in St. Louis, MO, on June 28, 1901, and he was known for his art work in 20th century America, particularly his sculptures.  It is said that he made hundreds of sculptures in his lifetime.  He is most famous for his work “Pennsylvania Railroad War Memorial” in Philadelphia’s 30th Street Station as well as being involved in the creation of the gigantic carving of Confederate leaders on Stone Mountain, GA.

He began to first pursue his passion for art at a young age. He spent a year at the School of Fine Arts at Washington University, but he received a scholarship to go to St. Louis School of Fine Arts so he left WU.  He went on to receive other scholarships to further his education in art.  At the beginning of his career he was also a teacher at the Pennsylvania Academy in Rome from 1929-1968.  He was a Captain in the U.S. Army during World War II and he led an effort to retrieve art work that had been stolen by Nazis.  He also designed the Air Medal, which is still used by the U.S. military.

He received many honors and awards for his work, such as Prix de Rome, George D. Widener Memorial Medal of Honor, the National Sculpture Society Medal of Honor, National Medal of Arts, and the Presidential Medal of Freedom.  His works were outstanding and numerous; he made sculptures of President George H. Bush, James Madison and a Christ figure.  His art went as far as being presented in the New York World’s Fair in 1939. 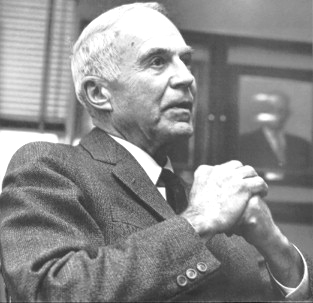 Statue Casting
Compiled by MacArthur Memorial intern Chavon Freeman, Virginia Wesleyan College, April 2009
This bronze statue of Douglas MacArthur, by noted artist Walker Hancock, is a duplicate of a statue of MacArthur at the United States Military Academy at West Point which was unveiled 11 September 1969.  Only two castings of this particular statue have ever been made.

The work depicts Gen. MacArthur ca. 1944 in his famous khaki uniform and cap, holding his leather flight jacket.  The statue is 8’ tall and rests on a 5 ½’ tall granite base.  The base houses a time capsule which contains various MacArthur, Norfolk and MacArthur Foundation memorabilia.

Obtaining The Statue
The statue was purchased by the Gen. Douglas MacArthur Foundation at a cost of $36,000 and was unveiled 18 April 1970.  Gen. MacArthur’s wife, Jean, and their son, Arthur, Virginia Governor Linwood Holton, Ambassadors of 11 foreign nations and a color guard and band from Ft. Monroe were took part in the dedication ceremony.

The statue again underwent a thorough cleaning and restoration, this time on-site, by Bronze et al of Richmond, VA, in the summer of 2007. 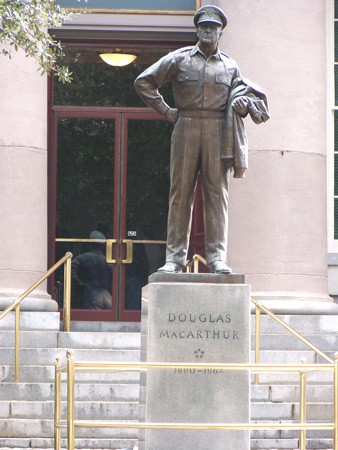