1950 Chrysler Crown Imperial Limousine
As Supreme Commander of the Allied Powers and the architect of the rebuilding of Japan after World War II not just any automobile would suffice to be the personal staff car for General of the Army Douglas MacArthur. Thus when the Cadillac assigned for his use began to show its age, the U.S. Army replaced it with a 1950 Chrysler Crown Imperial limousine.

The 1950 Chrysler Crown Imperial provided the “ultimate luxury in automotive transportation,” according to a press release from Chrysler announcing the introduction of the model. It was available in two body styles – a limousine or eight-passenger sedan. “The limousine is designed for those who prefer a chauffeur-driven car” and featured a power-operated glass partition between the front and rear compartments, power windows and two fold-down seats in the rear compartment.

The 1950 Crown Imperial was also the first Chrysler model to feature disc brakes, then considered a break-through in automobile safety technology. The Crown Imperial also was the largest car in the Chrysler line at that time, with a 145 1/2” wheelbase and was 229 3/8” long overall. Under the hood is a 135-hp Spitfire engine with a Prestomatic Fluid Drive transmission. 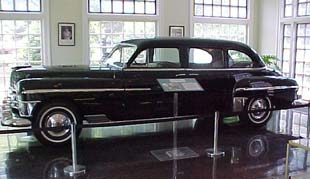 Personal Use
The largest artifact in the MacArthur Memorial’s collection, this automobile served as Gen. MacArthur’s personal staff car from just before the Korean War until shortly before the General’s death in 1964. It was ordered by Gen. MacArthur in early November 1950 and was sent to Japan via ship, the USAT General Nelson M. Walker, arriving later that month.

The limousine carried MacArthur to and from his office at the Dai Ichi insurance building in Tokyo during the latter part of the Occupation of Japan. When MacArthur returned to the United States in 1951, the Crown Imperial was shipped to him in New York City where he continued to use it until 1963, when it was returned to the U.S. Army motor pool and subsequently given to the MacArthur Memorial.

When first received by the MacArthur Memorial, the Chrysler was displayed in an addition to the main Memorial building, which has since been removed to restore the 1850 Courthouse more to its original appearance. Since the late 1970s, Gen. MacArthur’s Crown Imperial has been on display in the Memorial’s gift shop. 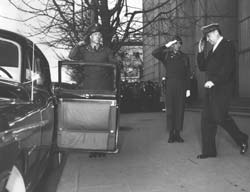 Fond Memories From MacArthur's Drivers
One of MacArthur’s chauffeurs, Bill Hansen, recalled for a recent newspaper article a fender-bender while driving MacArthur along a New York highway. “We were on the Grand Central Parkway headed north and got bumped on the right rear bumper. MacArthur said ‘Don’t worry, the Government will take care of it.’” However, while viewing the limousine on display at the Memorial years later, Hansen was able to point out the dent which was never repaired.

Charles Steever, who drove Gen. MacArthur for twelve years during the 1950s and 1960s, also related an amusing incident of his time chauffeuring the General. A New York state trooper pulled Steever over on the Merritt Parkway as Gen. MacArthur was on a business trip to Connecticut. However, when the trooper saw MacArthur seated in the back, “We wound up with a police escort all the way to Connecticut,” Steever recalled.

The General’s limousine was featured in an article in the July 21, 2006, edition of the Virginian-Pilot. 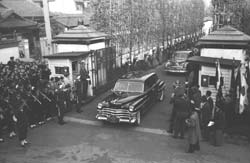