The MacArthur Memorial is proud to announce the opening of the James J. Halsema collection. Collections like these are rare, and it is a great privilege to house the Halsema Collection in the MacArthur Memorial Archives and Library. Comprised of over three thousand books, two thousand maps, and the personal papers of James J. Halsema, this is a unique collection of the entrancing yet turbulent history of the Philippines.

Within the collection were the papers of Mr. J. Heilbronn, who was reputed to have been the first American to land in the Philippines in the Spanish-American War.

The photo of the execution of a Philippine insurrectionist was included, ca. 1898

Along with the rest of the allied civilians in the Baguio area Halsema was incarcerated in the civilian internment camp at Camp Holmes. He spent three and a half years in captivity and endured torture at the hands of his Japanese captors. He was liberated in Manila along with the rest of the Baguio civilian internees at the old Bilibid Prison in February 1945. His internment was only a small chapter in his life. 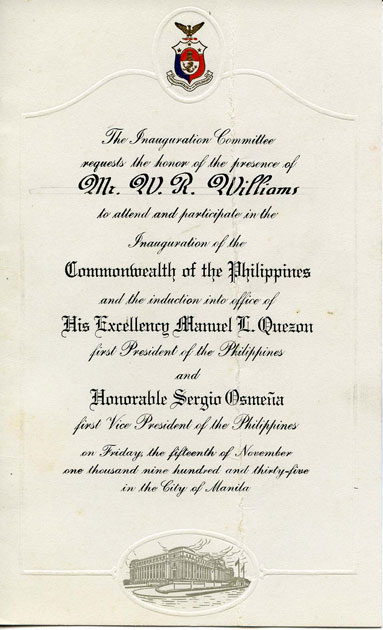 James J. Halsema led a full and interesting life. After the war he took a job with Associated Press. In the summer of 1949 he married Margaret Alice Cleveland with whom he had six children, and earned his Master’s Degree in International Relations from Johns Hopkins University. That same year, Halsema began working with the United States Information Agency (USIA) as a Political Affairs Officer. He served in Singapore, Manila, Cairo, Chile and several other places before his retirement in April of 1979. In retirement, Halsema generated several books and articles about his father, his schooling, and the American era in the Philippines. James J. Halsema passed away on February 18, 2005.

A library of over three thousand books of Filipiniana.

James Halsema’s extensive collection of books, maps, and papers donated to the MacArthur Memorial is indicative of his lifelong attachment to, and affection for the Philippines. He collected anything concerning the history of the archipelago, its many native peoples, its culture, and its literature. His near three thousand volume collection ranges from World War II history to novels set in the Philippines; from hotel pamphlets to telephone directories; from scientific books like Tropical Blossoms in the Pacific to government printings of official rulings. Cataloguing and indexing of the library has been completed and it is now open for use. The MacArthur Memorial wishes to thank Mrs. Alice Halsema, Mr. Paul Halsema, Mr. Lou Jurika, Miss Sherri Barnes and Miss Laura Nogrady for all their help in making this collection available to the general public.

Halsema’s massive collection of correspondence includes many former Philippine Guerrillas, Prisoners of War, and Veterans of the Japanese Internment Camps.

Halsema is seen at the MacArthur Memorial in 1994 with former guerrilla Lt. Col. Edwin Ramsey and his wife.