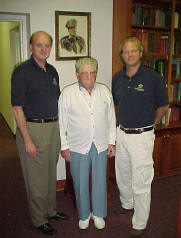 Captain James R. Normile, USAF, ret., visited the MacArthur Memorial on 16 August 2006. The last surviving pilot of MacArthur’s World War II General Headquarters, Normile stopped by the Memorial while visiting his son, who is stationed in Norfolk at the Joint Forces Staff College. Captain "Bob" Normile was one of five pilots that flew for MacArthur’s Headquarters during World War II. He was gracious enough to sit down for an hour and record his experiences of his time in the Southwest Pacific Area.

His reminiscences were clear and precise, filled with previously unknown details, humor, and reflection. The highlights of his oral history were his reflections on the many personalities in General Headquarters, the details of flying in the South West Pacific Area, and his trip to deliver MacArthur his brand new Boeing C-54 Skymaster in 1945. The transcript of the oral history is available from the archives for all those interested. Thanks again to Captain Normile for his service and the honorable experience of his visit.