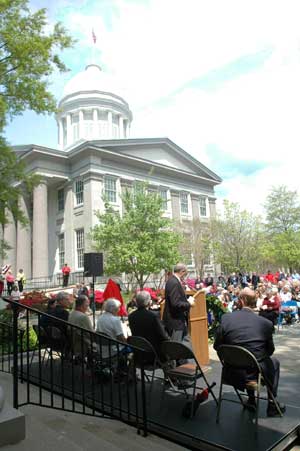 Liberation Weekend at the MacArthur Memorial, April 22-24, was truly a celebration of freedom. The dedication of the Liberation Plaque and opening of the new special exhibit Behind Barbed Wire: Japanese Internment Camps in the Philippines, 1941-1945 was a special moment for the MacArthur Memorial. More than 50 former internees from Baguio, Santo Tomas and Los Banos internment camps and veterans of the 1st Cavalry Division, 44th Tank Battalion and 24th Marine Air Group attended the ceremony and created an atmosphere that was just magical the whole weekend. It was a large family reunion of people who had once bonded together under the most trying circumstances, many of them children at the time, who still share the same bond 60 years later.

A weekend forecast of rain was ignored by all. Even if it had, the rain would not have dampened the exuberant spirits of these people in the slightest. The honored guests gathered together at the local "Blue Plate" restaurant the night before the dedication ceremony. Former internees that had not seen each other for 60 years, since the liberation of their internment camps in 1945, were brought together again. The place was simply abuzz with excitement and laughter. As a highlight, filmmaker Lou Gopal and his wife Michelle previewed scenes of their yet to be released documentary "Visions of Circumstance" about life in Santo Tomas Internment Camp. Karen Kerns Lewis then shared some prewar movies of her family in Manila that included many of the people in the crowd. It was a fantastic night and everyone cleared out before the Rock-n-Rollers took over the restaurant. Thanks a million to Gary McIntyre, Dave Hansen, Rob Thompson, Amanda Janes and Kendall Heath of the "Blue Plate," and to the MacArthur Memorial’s own Cynthia Stevens, who served as hostess for the night. It was superb.
Saturday began bright and early with still no rain in sight and the start of the oral history project set to begin. John McLaughlin, educator at the MacArthur Memorial, took over the processing and debriefing of the former internees and veterans in military style. None of it could have been possible without the professional attitudes and dedication of MacArthur Memorial volunteers Dr. Richard Neal, Pat Doss, Roseanne del Parto, FranWilmer and Tim Darley. They were able to guide the internees and veterans through more than 30 hours of recorded oral history. It was a phenomenal task and the MacArthur Memorial owes them a great debt of gratitude. All tapes will be transcribed and made available to all. 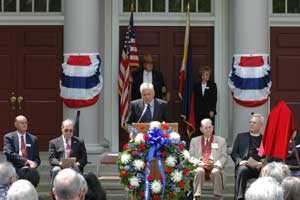 At 2:00 p.m. the clouds were still holding and the sun found its way through to warm the crowd of over 400 people and the abundance of azaleas blooming in MacArthur square. All seemed set for the dedication of the Liberation Plaque, but gusty breezes tried to strike down the colors. Luckily, the MacArthur Memorial’s Janice Dudley and Major Michael Quinn, USAF, (Retired) were quicker to the flagpole than Arthur MacArthur at Missionary Ridge. Honored guests Excellency Albert Del Rosario, Ambassador of the Philippines; Liz Irvine, former internee and member of the Manila Liberation Reunion Committee; and Robert Holland, veteran of the 24th Marine Air Group and member of the famed Flying Column that liberated Santo Tomas; took their places. MacArthur Memorial Director, Colonel William J. Davis, USMC (Retired), and General Douglas MacArthur Foundation Chairman Arthur Diamonstein began the ceremony and introduced the speakers. The emotion of freedom these guests treasure, something people who have never had it taken away can’t understand, was the dominant theme of the speeches. The former internees and veterans proved it in their very manner. As one visitor was overheard to say, "Are these people always so happy?" 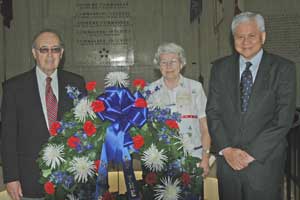 The Liberation Plaque was then unveiled. A beautiful red bronze plaque measuring 24" x 24", it was created by master sculptor Wilfredo Quilion of Berkeley Machine and Iron Works in Norfolk, VA. It honors the sacrifice of the internees of Baguio, Los Banos and Santo Tomas; and the service of the veterans of the 1st Cavalry Division, 44th Tank Battalion, 11th Airborne Division and 37th Infantry Division. The plaque is now mounted on the opening panel of the special exhibit Behind Barbed Wire: Japanese Internment Camps in the Philippines, 1941-1945. Upon completion of the exhibit it will be mounted on a granite base donated by the family of former Santo Tomas internee Earl Carroll.
All 50 internees and veterans gathered on the front steps of the MacArthur Memorial for a group photo and the sunshine continued despite the doom forecasts of rain for the entire weekend. The photo finished, the doors of the theater were thrown open and the crowd was greeted by the hospitality and indispensable services of MacArthur Memorial Belles Ruby Papa, Janice Dudley and Mitzi Van Horn who helped serve the exquisite combination of delicious Philippine foods provided by the Council of United Filipino Organizations of Tidewater Board of Trustees, the Baguio Association, the Pangasinan Association and the Filipino American Veterans of Hampton Roads.

Curator Katherine Renfrew’s new exhibit, Behind Barbed Wire, is a fitting tribute to the memory and history of the Japanese internment camps in the Philippines. Highlighted are many photographs and artifacts provided by the internees themselves. The craftsmanship of Norfolk Civic Facilities painter Sam Sitzler and carpenter John Frahm was flawless and to them also a great debt is owed by the MacArthur Memorial. The approval of the internees and veterans of the exhibit was a true blessing. The special exhibit will run through February 2006.

Though everyone tried to slow the time, one by one they all, like MacArthur, began to fade away. Goodbyes and "keep in touches" were thrown to the wind and then all was done. As the last chair was put on the Norfolk Civic Facilities truck the heavens finally opened up. The rain had held off for two days and at the last second came down in a torrential downpour. One former internee was left in the square and as he made his way into the Theater someone yelled, "Hurry up it’s starting to hail." His reply was "It’s all right I’ve been through a lot worse." (Article written by MacArthur Memorial Archivist, James Zobel.) 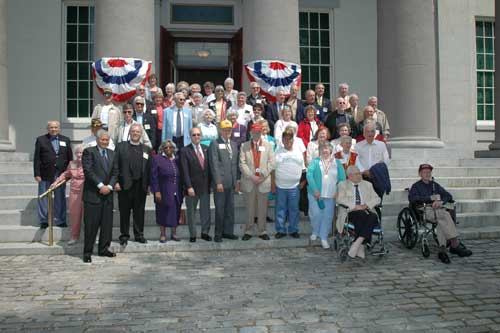