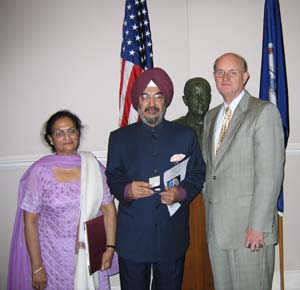 In celebration of Asian-Pacific Heritage month, the 15th annual Asian Festival was held at the MacArthur Memorial on May 7, 2005. This year’s festival was hosted by members of the Indian community and the theme was "Compassion-Peace-Justice" in honor of the victims of the December 2004 tsunami.

The festivities began with the parade of countries, India, China, Philippines, Thailand, Korea, Pacific Islands and Sri Lanka, followed by the opening ceremony. The director of the MacArthur Memorial, Bill Davis and Mrs. Jagdish Singh, chairwoman of the festival, welcomed the audience. Ambassador R.S. Jassal, Deputy Chief of Mission, Embassy of India in Washington, DC, was the guest speaker. A traditional Indian dance and Veena recital were performed by Malini Sri Rama and Lalita Bala Subramaniam. Throughout the day there were talented artists performing their country’s traditional songs and dances on the square at the Memorial. The Chinese Jasmine Dance and Taiwanese Tribal Dance, Thailand’s traditional fingernail dance as well as the Bollywood Indian Hip Hop all were enjoyed. Korea presented their traditional Taekwondo and the Philippines performed many traditional and modern Filipino folk dances.
Thai, Indian and Filipino traditional cuisine was appreciated by everyone. Children and adults alike were able to participate in arts and crafts activities from each country.

Asian Fest is presented each year by the Asian-Pacific American Heritage Organization Hampton Roads (APAHO). This community based organization is dedicated to preserving, teaching and celebrating their respective heritages. Asian Fest 2006 will be held again at the MacArthur Memorial in May 2006 and the Filipino community of Hampton Roads will serve as featured country for the festival under the leadership of Dr. Manuel Hipol.
E-NEWSLETTER
GIFT SHOP
PODCASTS
SCHEDULE TOUR
[]