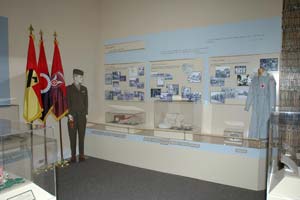 On April 23, 2005, the Memorial opened the special exhibit, Behind Barbed Wire: Japanese Internment Camps in the Philippines, 1941-1945. This exhibits recounts the poignant story of the men, women and children who lived through one of the darkest periods of history and honors them and the soldiers and civilians who saved them.

The exhibition, on display through February 28, 2006, examines the Philippines before the Japanese invasion and what characterized life for both the native Filipinos and the foreign-born residents. Focusing on the three major internment camps, Santo Tomás, Los Baños and Baguio, the exhibition offers insight into the internees’ initial contact with their captors and their daily lives during confinement.
Some succumbed to death while others with the help of the Filipino civilians and their own sheer will were able to survive until their eventual liberation in February of 1945.
The rescue missions were carried out by the brave soldiers of the 1st Cavalry Division, 11th Airborne Division, 37th Infantry Division and 44th Tank Battalion of the United States Army. A narrative of their perilous journeys and successful release of the internees are highlighted in the exhibit.

The exhibit includes many original artifacts donated or loaned by former internees that convey a variety of emotions: Mrs. Irene Miller Browning’s jewelry that her husband painstakingly made for her while they were both interned reveals a husband’s love for his wife. A green bean bag frog owned by Caroline Bailey Pratt when she was a child interned in Santo Tomas. 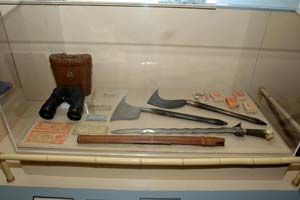 The frog, now flat, was torn open and the beans rationed for dinner during the family’s internment. Jack Bateman’s hand made Boy Scout shorts he wore while interned, and Karen Kerns Lewis’ hand made paper dolls. These reveal a mother and father’s wish to raise their children as normally as possible while in a fearful and horrible environment.

The binoculars used by legendary guerrilla fighter "Chick" Parsons’ and an 11th Airborne Division soldier’s uniform reminds us of the battles against the enemy. In addition to these artifacts, World War II Japanese military items, World War II civilian Filipino items, U.S. military insignia and flags are displayed. These items as well as memorable photographs, and original documents vividly capture the complete story of Japanese internment camps in the Philippines and give us tangible evidence that truly interprets the internees’ experiences.

Behind Barbed Wire: Japanese Internment Camps in the Philippines, 1941-1945 gives new meaning to the words sacrifice and freedom, and provides a deeper appreciation and understanding of the United States’ shared history and relationship with the Philippines.