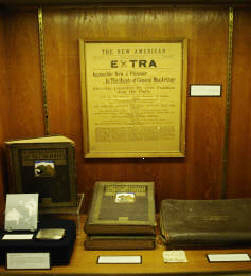 In 2005 the Archives had its biggest year to date. More than 1,700 research requests from the general public were served thus shattering all earlier records.

As well, some 300 visiting researchers made use of the collections at the MacArthur Memorial. One interesting highlight of researchers this year was that General of the Army Douglas MacArthur was a topic of the National History Day competition this year, so the Archives had many elementary school children requesting information.

Four of our researchers have just published their works. The new titles are:

The Bonus Army: An American Epic / Paul Dickson & Thomas Allen Walker and Co.
The Philippine Internment Camps Oral History Project continues. Two more oral histories were conducted for the project. Mr. Ed Powers of West Chester, PA, was an employee of Pan American Air Lines when he was caught in the Philippines and subsequently interned in Santo Tomas Internment Camp. Lindsay Nielson of Ventura, CA, was a boy who was interned in Santo Tomas with his family. We appreciate the participation of these two men and encourage any other veterans of the Philippine Internment Camps to contact the MacArthur Memorial Archives. More than 30 transcripts have been produced since the project began. The oral history project has been a great success and will continue as long as there are more stories to be heard.

With funds provided by the General Douglas MacArthur Foundation, the Archives just finished a project to transfer 35,000 feet of 16mm film to DVD. This is a great step forward in the preservation of the MacArthur Memorial Archives film collection. Norfolk’s Allied Video used the latest in technology to clean up the films, many of which date from the 1940s and 1950s. The transfer of films also helps facilitate the quick reproduction of them for use by the public.

New collections keep pouring in. These are the most recent donations:

Thomas Rehm of Fairfax, VA, donated over 250 photographs of the SWPA base at Hollandia, the Philippines Campaign of World War II, and Occupied Japan. The photographs were part of the collection his father, Colonel George Rehm, accumulated during his time on MacArthur’s staff in World War II. Mr. Rehm donated his father’s papers to the Memorial in 1997. The MacArthur Memorial had over 3,000 images of the Philippines campaign, but we did not have even one of the images donated by Mr. Rehm.

Mr. Lucien Campeau of Aurora, CO, and Charles Gillingham of Rockport, TX, donated the papers of the 15th and 20th Weather Squadrons, which served in the Southwest Pacific under Mac-Arthur’s command in World War II. These weather squadrons advanced through New Guinea to the Philippines with MacArthur’s forces. Some of the men, like Mr. Campeau, were inserted into the Occupied Philippines to work with the guerrillas providing weather information. It is a great and much appreciated collection.

Richard Milford of Warr Acres, OK, donated 167 images of Occupied Japan. Milford served with the GHQ Honor Guard while in Japan and served as an electrician at the U.S. Embassy. His collection contains many images of the MacArthurs and activities at the U.S. Embassy in Japan.

Lt. Col. and Mrs. William W. McLean of Hilton Head, SC, donated their collection of materials about Lt. Col. Arthur K. Noble. Noble was a guerrilla leader on Luzon after the surrender of Bataan and Corregidor. He was caught and executed by the Japanese in 1943. Mrs. McLean is the daughter of Lt. Col. Noble.

Mr. James Mason of Gloucester, VA, donated a March 28, 1901, edition of the Manila New American. It is a significant piece in that the headline for the day was the capture of Philippine Army leader General Emilio Aguinaldo. Aguinaldo’s capture by Brigadier Frederick Funston, U.S. Army, signaled the end of organized resistance during the Philippine Insurrection.

Donald Mansell of Nampa, ID, donated a copy of his book Under the Shadow about his experiences as an internee in the Japanese internment camps in the Philippines. Mr. Mansell also donated a copy of the diary the book was based upon.

We implore anyone that knows of any materials relating to General MacArthur, the Spanish American War, World War I, World War II, the Occupation of Japan, or the Korean War to contact the Archives. It could be that someone is desperately looking for that piece of paper or photograph that is now collecting dust in a basement or attic.
E-NEWSLETTER
GIFT SHOP
PODCASTS
SCHEDULE TOUR
[]