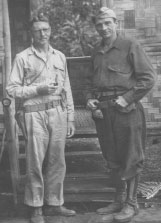 After many years of searching, the MacArthur Memorial Archives are proud to announce the acquisition of the papers of Lt. Cmdr. Frederick "Fritz" Worcester. Worcester, who is probably best known as the intelligence officer for Mindanao guerrilla commander Colonel Wendell Fertig, saved almost every scrap of paper from his career. His collection reflects on his service not only with Fertig, but as an officer with General MacArthur’s Southwest Pacific Area Counter Intelligence Corps and as an advisor to Paul McNutt, High Commissioner of the Philippines, in the postwar era. Donated by Worcester’s daughter, Betsey Numrich of Inver Grove, Minnesota, the papers are a gold mine of materials never seen before.

The son of Dr. Dean Worcester, who was one of the U.S. Secretary of the Interior’s first officers to go to the Philippines upon its acquisition by the United States in 1898, Frederick Worcester was a private citizen living and working in the Philippines when he was called to the colors after the Pearl Harbor and Clark Field attacks by Japan in December 1941. Assigned duties as censor for the United States Navy, Worcester served on Corregidor until he was sent on a special mission to the island of Mindanao in March of 1942. It was on Mindanao that Worcester chose to evade capture rather than surrender with Major General William Sharpe’s Visayan command in May 1942.

Worcester teamed up with Fertig’s guerrilla command in February 1943, and was made G-2 or intelligence chief, for the 10th Military District. The position, however, was short lived as Worcester clashed with Fertig over plans for defense of the guerrilla kingdom in Mindanao’s Misamis Occidental province. In April 1943, Worcester warned Fertig the position of the command was precarious as they were set up with no in-depth defense of their area. Fertig told Worcester to quit worrying about it and two months later, as Worcester predicted, the Japanese invaded Misamis Occidental in force and scattered Fertig’s command to the winds inhibiting operations for many months to come. The Worcester collection contains a treasure trove of documents about this and many other episodes in the 10th Military District.
Eventually taken to Australia by submarine in 1944, Worcester went to work in the Southwest Pacific Area’s counter intelligence corps under the command of Colonel Elliott R. Thorpe. He was responsible for the investigation of collaborators, black marketeers, and crimes in the Philippines during the Japanese Occupation. His papers contain all his reports and personal thoughts about what he was doing. Of particular interest is that Worcester was responsible for the inquest into the rumored collaboration of Manuel Roxas, who became the first President of the Philippine Republic in 1946.

After the war Lt. Cmdr. Worcester went to work for Paul McNutt, who was the United States High Commissioner for the Philippines from the end of World War II until independence in July 1946. The reports, correspondence, and thoughts of Worcester during this period give detailed insight into postwar Philippine politics, the Hukbalajap resistance, and the recognition of guerrillas.

The donation of the Worcester papers is a great honor for the MacArthur Memorial and we are looking forward to increasing this collection as more materials in the possession of the family are uncovered. It is a most important collection and contains not only the papers of Frederick Worcester, but also those of his father Dr. Dean Worcester, who was one of America’s earliest experts on Philippine history, life and culture. We are forever in the debt of Mrs. Betsey Numrich for making this collection available to all.
E-NEWSLETTER
GIFT SHOP
PODCASTS
SCHEDULE TOUR
[]