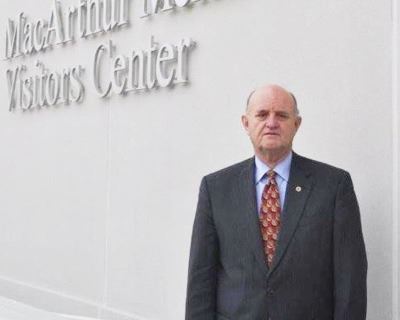 The Foundation's initial efforts resulted in a larger-than-life bronze statue of the General and the construction of three new buildings for the Memorial complex. The Jean MacArthur Research Center houses the historically valuable MacArthur Papers, his personal library, and the classrooms that support an education program. The theater contains additional displays and shows a film of the General's life. The gift shop provides a service to the many visitors to the Memorial. Recently, the Foundation provided $1.1 million for the expansion of the theater and research center

The Foundation currently supports many programs to meet its goals. First, and foremost, is the support of the Memorial. The Foundation promotes research, study, and publication to make known the achievements of General MacArthur. Projects are undertaken with outside agencies such as the Department of Defense, other museums, veterans' organizations and educational institutions. Special events commemorating General MacArthur are conducted on historic dates. Awards for excellence are presented for individual leadership and achievement.

The Foundation receives funds from memberships in the MacArthur Committee, donations from people going through the Memorial, profits from the gift shop, and the largest portion from an endowment fund. This trust has accrued over the years principally through contributions from those who admire General MacArthur and agree with the objectives of the Foundation.