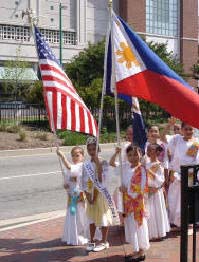 For the third year, members of the Asian-Pacific communities of Hampton Roads celebrated their respective heritages during the annual Asian Festival celebration at the MacArthur Memorial on May 6, 2006. This year’s festival was hosted by members of the Philippine community with the theme of "Bridging Asian Generations."

As in past years the festivities began with the parade of countries, Philippines, Pakistan, China, Vietnam, India, Sri Lanka, Thailand and Korea, followed by the opening ceremony. The Director of the MacArthur Memorial, Bill Davis, Dr. Cynthia Romero, Mistress of Ceremony and Dr. Manuel Hipol, Chairman of the festival, welcomed the audience. The guest speaker for the ceremony was The Honorable Domingo P. Nolasco, Consular General, Embassy of the Philippines in Washington, DC. Reading the proclamation marking Asian and Pacific American Heritage Day in the City of Norfolk was the Honorable Paul D. Riddick, Vice Mayor of the City of Norfolk. Performing for the official opening was the Rondalla Pampango Youth Club conducted by Grace Lanada.

Throughout the day, talented artists performed traditional songs and dances, demonstrated martial arts, featured a traditional wedding scene from Pakistan and treated visitors to a Vietnamese fashion show. Additionally, children and adults alike were able to participate in arts and crafts activities from each country.

Asian Fest is presented each year by the Asian-Pacific American Heritage Organization Hampton Roads (APAHO). This community based organization is dedicated to preserving, teaching and celebrating their respective heritages.

Asian Fest 2007 will be held again at the MacArthur Memorial during May 2007 and the Chinese community of Hampton Roads will serve as featured country for the festival.
E-NEWSLETTER
GIFT SHOP
PODCASTS
SCHEDULE TOUR
[]