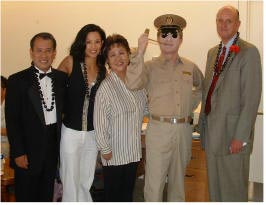 This past summer, the Foundation joined with the Okinawa-American community of Los Angeles and the Worldwide Uchinanchu Business Association North America in remembering General MacArthur’s legacy in Okinawa following World War II.

The Los Angeles Okinawa-American community sponsored the performance of a musical entitled "Pigs from the Sea" to a sold out performance in the Marsee Auditorium at El Camino College in Torrance, California.

This musical is based on the relief effort by the United Okinawa Association in Hawaii in raising funds to provide recovery support to the people of Okinawa following World War II. This effort involved the brave efforts of seven Okinawa-Americans, the crew of the U.S.S. Owens and the active support of General MacArthur. The musical is set in 1948 and tells the story of the transportation of 550 pigs to Okinawa in order to stave off famine and to reestablish Okinawa’s animal husbandry industry.
Performing in the musical was a cast from Okinawa, supplemented by local performers from the Okinawa-American community of Los Angeles. A special added attraction to the performance was the appearance by Hollywood star George Takei as General MacArthur. Transforming Mr. Takei to General MacArthur was Emmy Award winning markup artist Mrs. Kaori Nara Turner. Also participating in the production were actress Tamlyn Tomita and vocal artist Ayako Kawana.

This story is one of compassion and sacrifice and provided the audience a clear understanding and appreciation for those Americans and Okinawans who established a proud legacy of humanitarian service. The musical format also served, as United States Consul General to Okinawa, Thomas Reich wrote, as "an excellent vehicle of introducing the song and dance of Okinawa" to the audience.
E-NEWSLETTER
GIFT SHOP
PODCASTS
SCHEDULE TOUR
[]