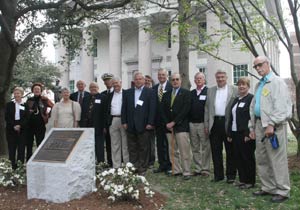 The Liberation Plaque Memorial was dedicated in MacArthur Square on April 1, 2006. Attended by more than 100 people and 13 former internees and liberators of the Japanese Internment Camps in the Philippines, the rain held off long enough for the ceremony to take place.

In his autobiography Reminiscences, Douglas MacArthur said that the liberation of the Santo Tomas, Bilibid, and Los Banos Internment Camps in the Philippines, February 1945, were his proudest moments in World War II. He could not remember a more moving spectacle in his whole life of amazing events than his entrance into the liberated Santo Tomas camp. He proclaimed, "It was a wonderful and never-to-be-forgotten moment - to be a life saver, not a life taker."

How much different the fate of the civilian internees of the Japanese might have been had there been no Douglas MacArthur. It was MacArthur who pushed incessantly for the liberation of the Philippines, a goal which most Allied strategists rejected. Had MacArthur not pushed so hard and the Philippines been bypassed, then the story and memory honored at the MacArthur Memorial on April 1 would never have occurred. 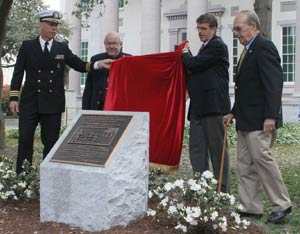 In late January 1945, MacArthur sent a small force to Manila with orders to bypass Japanese strong points and secure Santo Tomas Internment Camp and hold it until the rest of Sixth Army made its way to the city. If MacArthur had not pressed his forces in the drive to Manila in January 1945, against the better and correct judgment of his Sixth Army Commander, LGEN Walter Krueger, the fate of the Bilibid and Santo Tomas internees might have been different.

Soon after the 11th Airborne Division’s invasion at Nasugbu, Luzon, just south of Manila in late January 1945, MacArthur pressed Eight Army Commander LGEN Robert L. Eichelberger to put together an operation to free the civilian internees at Los Banos Internment Camp. The battle of Manila was Eichelberger’s top priority, but MacArthur insisted the operation to free the internees be made immediately. Had MacArthur not pushed, the fate of the Los Banos internees might have been different

As there is a special bond between the Baguio internees of Bilibid Prison and their 37th Division liberators; the Santo Tomas internees and their liberators of the 1st Cavalry Division, 44th Tank Battalion, and Philippine guerrilla forces; the Los Banos internees and their 11th Airborne Division, 672nd Amphibious Tractor Battalion, and Philippine guerrilla liberators; there is a special bond between all of them and Douglas MacArthur.
In MacArthur Memorial Square there are not many memorials like the Liberation Plaque Memorial. As the years go by there won’t be many more, but this one is special and one MacArthur would have most appreciated for it was given to his Memorial by all those he helped save. In perpetuity the memories of MacArthur and the 7,000 or more liberated internees will be honored together by this plaque. Long after we are all gone, the relationship between the internees, their liberators, and Douglas MacArthur will be one of the first stories to treat visitors to the MacArthur Memorial.
E-NEWSLETTER
GIFT SHOP
PODCASTS
SCHEDULE TOUR
[]