Comprised of men hand-picked for the assignment, General of the Army Douglas MacArthur’s Honor Guard was one of the most important and visible parts of the General’s official family during the closing months of World War II and throughout the Occupation of Japan. The members of this elite unit were selected based on their military bearing, intelligence and physical stature. Every combat Division of the U.S. Army in the Pacific was represented in its ranks. They were the best of the best. They had to be – General MacArthur would accept no less than the best for the men entrusted to provide security not only for himself and his Headquarters but for his family as well. Only the Finest: General MacArthur’s Honor Guard examines a heretofore little-known unit that was such a large part of General MacArthur’s military family. 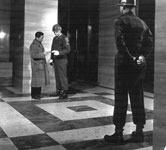 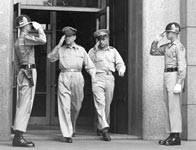 The Honor Guard was formed in May 1945 for the purpose of guarding General MacArthur’s headquarters and residence, and served the General and his family until MacArthur’s relief during the Korean War in April 1951. The original members of the Honor Guard were chosen from each of the Divisions of the U.S. Army in the Pacific theater, many of them decorated combat veterans. For acceptance into the Honor Guard, the men had to meet criteria very similar to the requirements for Officer Candidate School.

The unit maintained a strength of about 200 officers and men. Half of that number guarded the General’s headquarters, the other half guarded the MacArthur family residence at the United States Embassy compound. Because of their proximity to MacArthur, the men of the Honor Guard were not only witnesses to major events in history, but in some instances were themselves actually a part of those historical events. Members of the Honor Guard are visible in many of the hundreds of photographs taken of General MacArthur during the Occupation of Japan.


When General MacArthur was removed from command during the Korean War by President Harry Truman, one of his final acts before boarding the plane that would take him from Japan was a review of the Honor Guard. The General told the Honor Guard commander that the unit had never looked finer than they did that day.

The Honor Guard continued on after General MacArthur’s departure, although with some changes. In 1953 the Guard expanded from an Army unit to include representatives from all four branches of the U.S. armed forces. In 1957 the Guard was disbanded.

Only the Finest includes many artifacts and photographs belonging to the men of the Honor Guard themselves, many of which are seen by the public for the first time in this exhibit. One of the most notable is a scrapbook about the Honor Guard compiled by the Guard’s first commander, Captain Raymond H. Richards, of Seattle, WA. Several gifts which were given to General MacArthur by the Honor Guard, including a silver-topped table engraved with a roster of the Guard, and a monogrammed smoking jacket, also are exhibited. 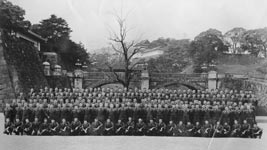