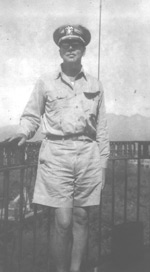 Frederick L. “Fritz” Worcester was born in Ann Arbor, Michigan on May 19, 1898.  He was the son of Dr. Dean C. and Nanon L. Worcester.  His father was a professor of zoology at the University of Michigan and one of the foremost experts on the Philippines at the turn of the century.

Upon his return to the Philippines, Worcester went to work for the Philippine Desiccated Coconut Corporation of which he eventually became the president and general manager.  In December of 1941, he was placed on active duty with the United States Navy in the 16th Naval District Headquarters in Manila.
Worcester’s service from the opening of the war until the surrender of the Philippines took him from Manila to Corregidor to Cebu to Mindanao.  Just prior to the evacuation to Corregidor on December 31, 1941, Worcester directed the removal of valuable shipping from the Pasig River while under bombardment.  For this action he won the Silver Star Medal.  Worcester then served on Corregidor until sent on a special mission to the Visayan Islands on February 20, 1942.  Worcester traveled with future Philippine President Manuel Roxas and U.S. Naval Reserve officer Sam Wilson to transfer the printing plates for Philippine currency out of harm’s way on Corregidor.  In this pursuit, all three ended up on the island of Mindanao evading the Japanese onslaught through the Visayan Islands.  When surrender came on May 10, 1942, Roxas went into captivity.  Wilson and Worcester, though being separated earlier, both made the decision to take their chances in the jungle.  Worcester had planned on the eventuality and being from Mindanao, he had friends set up an evacuation place him in the Bukidnon region of the island. 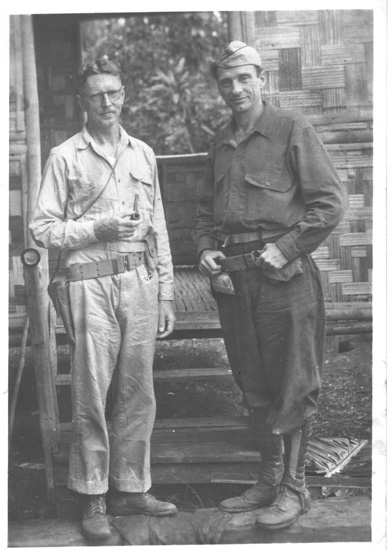 Worcester racked with malaria, hid out until late 1942, when he like many others heard of an American General from Australia operating out of the Misamis Occidental region of Mindanao Island.  Worcester showed up at “General” Wendell Fertig’s headquarters and offered his services to the reserve engineer officer with the rank of Lt. Colonel, who had promoted himself to Brigadier General.  Worcester had lived on Mindanao for many years and had valuable knowledge for Fertig about the island and its many peoples.  Worcester was made Fertig’s G-2, or intelligence officer for the 10th Military District.  It was an arrangement that did not last very long.

Worcester was almost immediately disillusioned with Fertig.  When he met him, Fritz was told by Fertig that he had full contact with MacArthur’s Headquarters and had been named as commander of guerrilla forces in Mindanao and the Visayan Islands.  This wasn’t really true.  Worcester also began to feel that Fertig did not have the competence to oversee the operations in the 10th Military District and accused him of issuing contradictory orders and brewing dissent within his own command.  Finally, Worcester advised Fertig that the guerrilla kingdom he had established on the north coast of Mindanao would be immediately wiped out should a Japanese invasion come.  Fertig disagreed and felt Worcester was panicking.  Shortly thereafter the Japanese invaded and Fertig’s command was scattered to the jungle just like Worcester predicted.  By November 1943, both were at complete odds with each other and Worcester left for the island of Negros and the 7th Military District under Lt. Colonel Salvador Abcede.
Worcester’s days as a guerrilla ended in late January 1944.  Along with American civilians and others, Worcester was retrieved from the island of Negros by the navy submarine, USS Narwhal.  He was taken to Australia and after recuperation from malaria and other ailments he went to work as the Seventh Fleet liaison officer.  Worcester, however, would not have to wait too long to return to the Philippines.

After the return of U.S. forces to the Philippines in October 1944, Worcester’s new job took him back to the Philippines.  Then in January 1945, when MacArthur was making plans to return to Luzon and the capital city of Manila a call was put out that all “old Manila hands” were needed to accompany the forces into the city.  Worcester signed on because he knew Manila very well, but also because his sister and her family were civilian internees in the Santo Tomas Internment Camp and had been locked up for three years.

After his release from active duty, Worcester accepted appointment as Special Assistant to the U.S. High Commissioner of the Philippines.  In this role Worcester did all the background research on all Filipinos that were charged with or rumored to be collaborators with the Japanese during the war.